Thunderbird does not work natively with Exchange/OWA.  That is the short answer I have been giving people for a long time.  In the past few days I have stumbled upon some software that is designed to sit between you and the exchange server and act as an interpreter.  That would be DavMail.  DavMail is not new, and like Thunderbird is an open source project so there are no licences to buy.   You simply download it and install it.

How does this affect the situation of using Thunderbird with Exchange servers?  It changes everything!

Until now we have been able (on some occasions) to convince the exchange server admin that turning on IMAP on exchange was a good idea, but for every success there have been probably a dozen failures and out of the box Exchange is totally inaccessible to standards compliant mail programs.  Evolution, Thunderbird, even the OSX Mail program can all benefit from this software because it make exchange 'just another mail server'.  The real beauty of this is that it does it's magic  from your computer so you don't need to go cap in hand to some system admin to ask them please do something, you simply install it an go from there.

When I installed the software it was simple, painless and just worked.  What is different is the way you set up accounts in Thunderbird.  Because you have put all he remote locations into DavMail, the server names you use are not the ones you would expect from the information provided by the Exchange administrator.  The server names for Thunderbird are simply localhost.  The user names are Domainname/username and will be the same as you use for OWA.

The instructions given for setting up mail accounts on the web site are only for version 2 of Thunderbird.
To setup in Thunderbird 6 and latter do the following.
Give the account setup wizard your mail address and your correct password and click next. it will look for settings and fail.

Once you get to the unable to detect your settings, manually edit the entries in the dialog as shown below. Remember to put your OWA signon in to the box at the bottom. 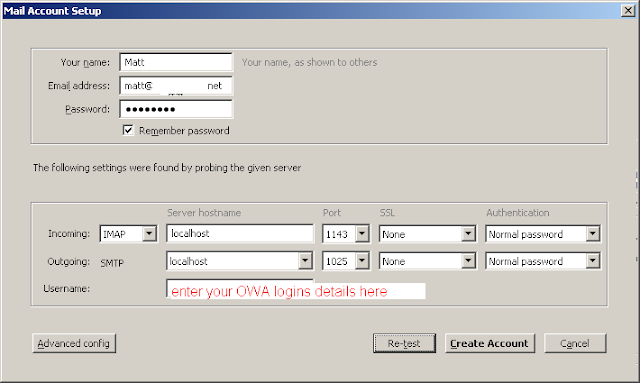 You are done, you have your Exchange/OWA account in Thunderbird. You can now add calendars and address books as shown on the MailDav web site.

For those using Linux there are instructions on UBUNTU here

The ExQuilla add-on supports Microsoft Exchange 2007 and later and is now available in Beta from the Mozilla Addon site. When used in conjunction with the Exchange calender provider for lightning  most Exchange features are available directly within Thunderbird
at November 06, 2011 15 comments: