Thunderbird and CCleaner or my settings will not stick.

for quite some time I have observed people complaining in support forums that they are unable to get the preview pane in Thunderbird to stay turned off.

I have also seen complaints that other changes to the layout of the folders and other elements of Thunderbird such as setting the folder view to something other than the default will not stick.

Recently I have learned that this action is not accidental, nor is it the result of a bug or some weird interaction between unrelated software.  It is deliberate

The people over at CCleaner appear to think that Thunderbird is a browser.  They also think that they are preserving your privacy be deleting the Session.json file from your profile after Thunderbird closes and you guessed it.  The file is used to store settings about what elements of the user interface is visible, or which type of folder fview you have selected.  Or even what headings appear on your message list.

The cure is also self evident once you know what is going on.  Complain most bitterly to the people at CCleaner who have caused you inconvenience and turn the silly option off.

Fortunately this is fairly simple and straight forward, just deselect session under the Thunderbird entry in CCleaner. 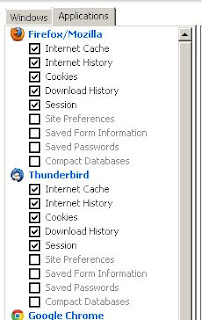